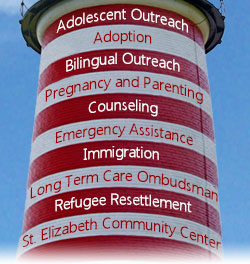 Catholic Charities in the Diocese of Rockford continues the ministry of Jesus in faithfulness to the Magisterium of the Church
~ ~ ~ ~ ~ ~ ~ ~ ~ ~
Our mission is to serve God's people for the common good with compassion, dignity and respect; to assist people in achieving a degree of independence consonant with their human dignity; and to work in solidarity with the Church and other people of goodwill in advocating for justice.

Cathy Weightman-Moore has been named the new director of Catholic Charities Administration and will assume her duties in that position officially on Jan. 4, 2021.

Weightman-Moore is familiar to many in the Diocese as she has spent her career in service to others as the director of the Long Term Care Ombudsman Program for the past 31 years. Before taking on the responsibility as Program Director and Regional Ombudsman she spent four years as a case worker in the Catholic Charities Foster Care Program.

She holds numerous professional affiliations including being a Senior Issues Committee member of the Catholic Conference of Illinois; is a committee member with the 17th Judicial Circuit Family Violence Prevention Coordinating Council At Risk Adults; is a member of the Older Adult Services Advisory Committee (OASAC) as a Regional Ombudsman Representative and member of the OASAC Executive Committee.

“As I’m soaking this all in and clearing up files, I recently reread an Observer article that my mom had saved from the 1950s. Her parents, my grandparents, John and Margaret Clausen, were foster parents for Catholic Charities when Father McNally was the director. I had heard stories from my uncles when they reminisced about those days. I was moved by the article as it described the mission of Catholic Charities and the respect they had for the individuals and families they served. I could never have imagined that someday I would be responsible for leading this agency,” Weightman-Moore said.

As the new director, Weightman-Moore says she looks forward to “continuing the mission of Catholic Charities as we move into 2021 and beyond.”

Under the current administrative model, Weightman-Moore will be the first female director of the agency since it was organized by Bishop Francis Hoban in 1937.